There have been quite a few weird coincidences while I was writing Wolf Mother (The Moonstruck Mother Series, Book 1). The freakiest of them all was learning (after I’d already plotted out the rough concept of the book which featured some cryptozoology sightings, unexpected animals in unexpected places, and werewolves in the south east of South Australia, was discovering that there actually was a story about those things already here, and it’s the story of the Tantanoola Tiger. 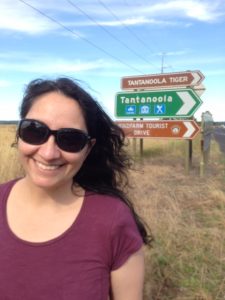 I discovered the existence of the Tantanoola Tiger during a research chat with my son’s teacher, who grew up in Mount Gambier. At the time, my son’s teacher wasn’t too clear on the details, but gave me the name, and my curiosity was piqued enough to research it further.

So, what is the story? Well, when I first went looking, there wasn’t much information out there online. And what I learned, I learned from a research trip to Tantanoola, and a visit to the Tantanoola Tiger Hotel. Julie, the publican, kindly shared the copies of the newspaper articles, she had on display, and some of the others that weren’t, and of course, I got to see the ‘tiger’ for myself. Now if you want to hear a more detailed story, this is an excellent podcast about it. 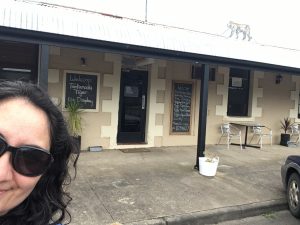 But, if you want a short version… here’s an excerpt from Wolf Mother:

‘According to the story in the papers, back in the late 1800s, a Bengal tiger went missing from a circus that was visiting Adelaide. There were several sightings of a large striped beast, and farmers complained about missing livestock. But when someone shot the “beast”, it turned out to be a wolf. It’s now stuffed and on display at the Tantanoola Pub,’ Estelle explained. 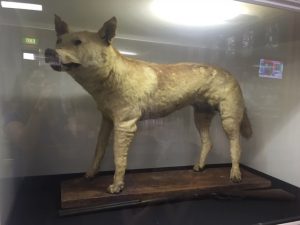 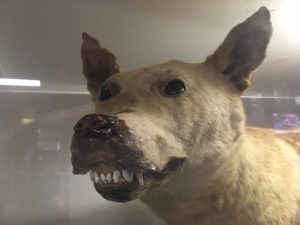 So how did they confuse a tiger with a wolf? Especially one that’s not orange, or striped? Well, the answer might lie with the existence of Tasmanian tigers, or thylacines. Thylacines were carnivorous marsupials with a ‘dog-shaped’ head, a long smooth tail, and stripes across their backs.

Sounds good so far, but there’s a slight problem. Thylacines are extinct. Although the last living thylacine (in captivity, in a zoo in Tasmania) died in 1936, thylacines on the mainland of Australia, were believed to have become extinct 2000 years ago.

So if you’re wondering how a wolf could be mistaken for a tiger (especially after seeing the  Tantanoola Tiger yourself) you’re not alone.

Okay, so lets ask another question. How did tigers and a wolf get to South Australia anyway? Because neither animal is native to Australia. Well, the  current theory is that the tiger might have escaped from a circus (as explained above) and the wolf might have been one of the animals brought to Australia during the goldrush. Although some US servicemen during World War II brought exotic animals to Australia, the story of the Tantanoola Tiger occurred before that time.

As an fantasy author, I of course have created another theory 😉

If you want to read a quirky story that blends women’s fiction with urban fantasy check out my book Wolf Mother here.