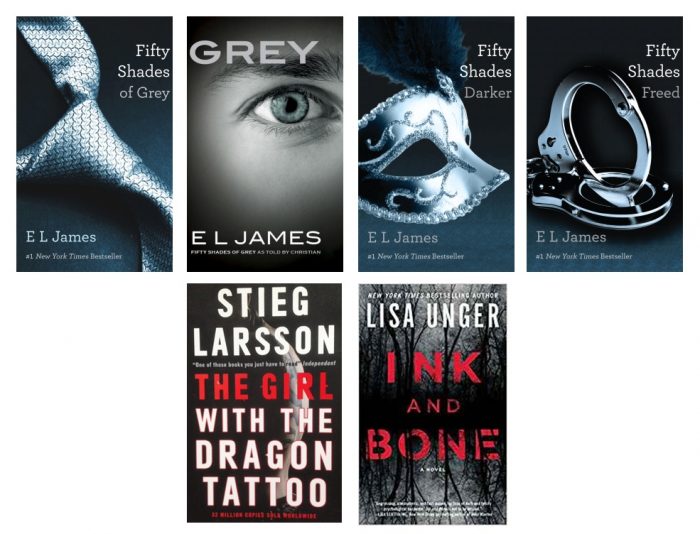 Well, this post is a little late coming as I’m writing it in August!! (Things have been busy with writing, editing and publishing my novella in a fantasy anthology check that out here). But finally, here is a summary/ review of the books I read back in April.

In April I was recovering from “minor” surgery so I was in bed a lot, and reading helped the painkillers last longer, so I got a lot of reading done. I also finished some Indie books I started in March, and I’ve chatted about those here (they were great). But in this post, I’m chatting about the mainstream published books I read.

The fifty shades series: Well one day I might give a longer chat about why I’m a bit over sex scenes in books, but not today. Today, I’m going to write about the Fifty shades books and how I was actually pleasantly surprised to enjoy them! (Also I keep finding myself wanting to say “Laters baby” haha). Anyway, everything I’d heard about these books was always about the sex. It was always “Ooh have you read those books?” (and usually asked in a slightly shocked voice). And so I assumed there was no actual story line.  So it wasn’t until I was chatting with Sarah after I finally watched the first movie (which I didn’t like) and Sarah said there was more to their relationship in the books that my curiosity was piqued so I decided to give the books a go. So here’s my conclusion/review, I didn’t expect to like these books but I did! I confess I pretty much scrolled past the sex scenes (not because I’m a prude – though I might be by some standards;-) but more because if you read enough contemporary romance and paranormal romance  over the years, you end up having already read a lot of it and it just becomes a race to see who can write a crazier sex scene). So anyway, with all that aside, I liked seeing how Christian evolved (I’m putting it firmly in the escapism category and with the disclaimer of “don’t try this at home kids” because I expect a wounded human like Christian would take more than his heroine’s love to recover (but I could be wrong) but all in all, I enjoyed the romance within the books. I found the email conversations and Christian’s constantly changing signature really funny and I also liked reading the Grey book which was written from Christian’s perspective. Like Midnight Sun (Twilight from Edward’s Perspective, by Stephenie Meyer, which I’ve talked about in a few writer chats) Grey gives writers a chance to explore the many ways a story can be told and how shifting the POV of the story can change the vibe of the story. So if you’re a writer, it’s good to read and if you’re a reader, the extra insight to his character is good too:-).

The girl with a dragon tattoo – I’d heard so much about this book over the years, that my expectations were really high. I enjoyed it, but I haven’t bought the second book in the series just yet. I found the characters interesting and I actually guessed the plot twist early on but that was only because so many people over the years had said, “Oh you’ll never guess the twist at the end,” which made me think as I read it, “It would be funny if….” and it turned out I was right. Still, it was a good book and I can see why it’s such a popular book. I’m interested in seeing the movie though, and that’s on the “To watch” list.

Ink and Bone – I really liked this book. I’d class it as magical realism/ thriller/crime as the main character is a psychic who helps a detective solve a missing child case. Author, Lisa Unger taps into people really well (it’s a bit like reading Liane Moriarty in the way she really captures how people think and interact), although this was in a different context with the thriller/ magical realism vibe and it’s a lot darker than Liane Moriary. I really enjoyed it, I wanted to read more books with this character, and while there seem to be more books in this “world” (it’s contemporary and set in a place called “The Hollows”) I don’t think this particular character has a sequel (which was disappointing). I’d definitely read more books by Lisa Unger, especially with this magical realism/ psychic angle.

Anyway, I’ll be back with my May reading list soon:-)